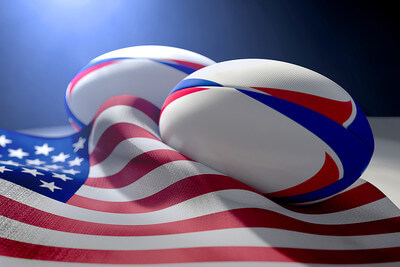 Everyone that plays or simply just appreciates rugby knows it’s a beautiful sport. And one of the most rewarding experiences this game has to offer is witnessing someone fall in love with it for the very first time.

More of us may be lucky enough to witness this phenomenon on a massive scale as the United States is slowly, but surely, falling in love with rugby.

Below, we’ll go over 10 things you should know about rugby’s growth in the US.

While it may go unnoticed in some areas of the world, rugby has a global reach that is growing at an exponential rate. In 2016 alone, World Rugby reported that the number of rugby players rose from 4.91 million to 5.3 million.

Thanks to the re-incorporation of rugby in the last Summer Olympic Games, the sport has undergone a resurgence across the globe. A study by HSBC predicts that by 2020 there will be more than 10 million rugby players in the world.

While the US already has a variety of unconventional sports to choose from, rugby is becoming more and more popular.

Here are the top 10 reasons why rugby is growing so quickly in the United States, in reverse order.

10. Rugby is Now An Olympic Sport

Rugby made a reappearance in the last Summer Olympic Games, which features both the men’s and women’s team. The event attracts more than 3 billion viewers worldwide, putting rugby on the radar of several countries for the first time.

Interesting fact: The USA was the reigning Olympic champions in Rugby! They won in 1920 and 1924 and Rugby didn’t return to the Olympic stage until 2016.

9. Rugby Players Are Migrating to the NFL

The fact that many rugby players can easily cross over to the NFL has awakened the curiosity of many American fans.

While the first rugby players first migrated to the NFL in the 1980s, the likes of Alex Grey and Jordan Mailata are organically making rugby a common household term in the US.

8. One English Premiership Rugby Game is Played in the US Every Year

For the past few years, the Premiership Rugby has played a game in US territory. And, while there is no indication yet that there will be an increase in this number, the Premiership’s CEO stated that they planned on continuing to build on this relationship.

7. A Documentary About USA Rugby is in the Making

Everyone loves a good film, especially if it’s a factual dark horse situation.

This is exactly why a documentary titled “The Pioneers” is currently in production stage and is set to be released at the end of the year before the start of the World Rugby Sevens Series.

The film will chronicle the quest of the US rugby 7s team as they set out on a journey from complete underdogs to (hopefully) world champions, while also increasing their local and international following.

6. The Women’s USA Rugby Team is Ranked 5th in the World

At the time of writing this blog, the USA women’s rugby team is ranked 5th in the world, which is incredibly impressive! Moreover, they are also one of just three teams to ever win the Women’s Rugby World Cup.

Not only is women’s rugby growing at the top-tier level, but the NCAA has even recognized it as an emerging sport. There are more than 11,000 female players registered at the collegiate level, and the NCAA is anticipating rugby’s transition into championship status.

5. And the Men’s Team is Ranked 6th Worldwide

Similarly to the women’s team, the USA men’s team is currently ranked 6th in the world, in rugby 7s, that is. Although they finished 5th in the rankings last year, 2018 is proving to be the year of the Eagles as they won their first cup that ended a three-year drought.

The team emerged victorious from this year’s USA Sevens Cup, defeating the likes of Fiji and  England before winning their first such title in a convincing win over Argentina.

One of the key ingredients in most, if not all, memorable teams have is a stand-out electrifying player and Carlin Isles is exactly that. Often referred to as the fastest man in rugby, he’s one of the habitual try scorers for the US rugby team.

Isles has taken the world of rugby by storm thanks to amazing his amazing skills and feats, like hitting a whopping 37 kph during a game last year.

3. The US May Potentially Host the 2027 Rugby World Cup

Right, this may be a long-shot if you analyze it superficially. But, given that high World Rugby executives such as Brett Gosper have hinted that the US should submit a bid to host the 2027 World Cup, it’s not such a crazy thought after all.

The truth is that the US has everything it needs to host a successful Rugby World Cup. With awesome sporting venues, a solid tourist infrastructure, and national broadcasters willing to air the event, don’t be surprised to see the US in the running to host the event in the next decade or so.

And, speaking of embracing rugby…

2. There Are Approximately 30 Million People in the US that Already Love Rugby!

World Rugby estimates that there are 30 million rugby union fans in the US alone, a number that is only matched by China in terms of net volume.

This is one of the biggest reasons why there is such a big movement towards rugby in the US. The size of the market itself can pose a superb growth opportunity for players and the sport as a whole.

1. Rugby Is the Fastest Growing Sport in America

Even though most of the mainstream media’s attention has gone to the success of the US football squad, rugby has grown 82.4% in popularity between 2011 and 2016. This growth, fueled by the success of the national team and efforts by the ruling rugby bodies, have culminated in what may be the beginning of a golden era in American rugby.

Oh, and one more…

The Rugby World Cup Sevens will be in San Francisco this year!

This is going to be a huge event in a great city with perfect weather conditions for a weekend of rugby.

The USA have a great chance at winning this tournament so let’s hope the USA reach the finals!

P.S Come and visit us at the Decathlon store in San Francisco whilst there! We’ll have a pop-up there + lots of limited edition tees and items for sale. The store is 0.9 miles away from the AT&T arena which will host the Tournament.