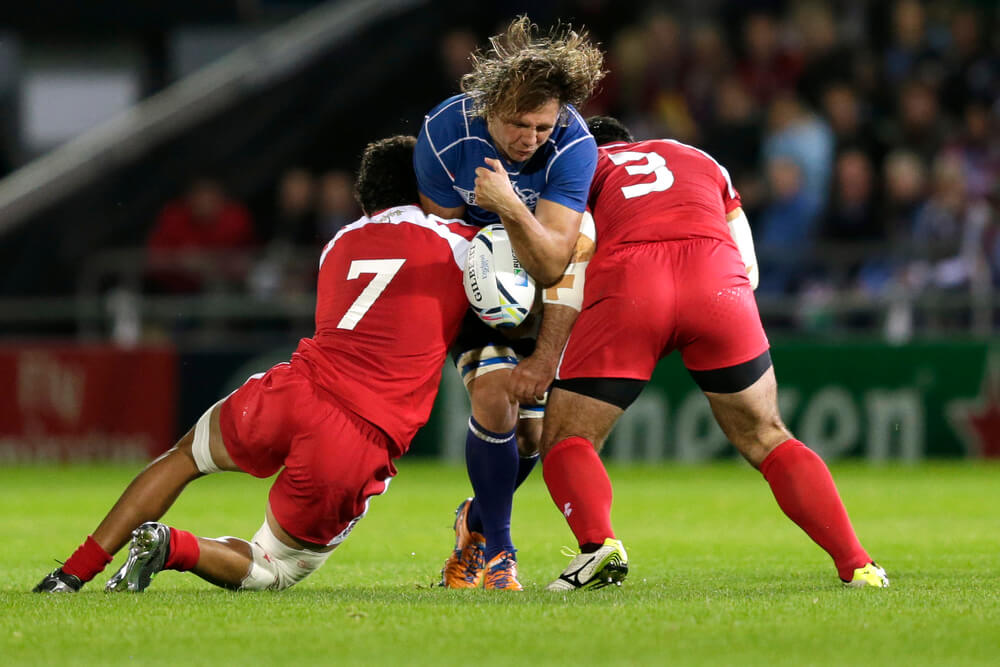 Everyone who has ever played or even simply watched a game of Rugby probably understands why it’s one of the most gruelling sports in the world.

Besides a gum shield, rugby is played without any real protective gear. And, with as many as 30 bodies on the pitch at all times, you begin to see why the gumshield is a minimum necessity.

The truth is that rugby is a brutal sport, no matter which way you look at it. But in order to really hammer our point home, we took a look at five specific categories to reveal why rugby is one of the most brutal sports in the world.

The impact of rugby on the human body.

Professional rugby players are no strangers to pain on and off the pitch. Injuries are extremely common, especially for players with chronic traumas. At least one injury is reported in 30% of all matches, and that number goes up to 44% if you include training sessions as well.

While concussions are still rugby’s number one issue, players can suffer from all types of injuries during a game. These can range from sprains to fractures and even ligament and muscular injuries. These may also result in long-term damage, which is one of the reasons why professional teams are so strict with some of their injury-related policies.

It’s worth mentioning that staying in shape and working out frequently can reduce the chances of getting hurt. All active rugby players should follow a healthy diet and a strict exercise regime to boost their performance and lower the chances of suffering a severe injury.

5 Ways Science Shows Us That Rugby Is Brutal

One of the reasons why rugby is such a beloved game in the UK and around the world is because of its fast pace and big hits. The sport gets even more impressive once you start unveiling the science behind it and start looking at slow motion clips on YouTube.

Here are five points that help cement rugby’s place as one of the most gruelling sports on the planet;

1) Playing a whole game is like being hit by a car several times.

The huge amounts of force that are exerted during a professional rugby game are the main reasons behind frequency of injuries. Scrums, tackles, and lineouts require a significant amount of force from each individual player, which may be exponentially increased depending on their technique.

On top of that, each of these events can happen more than 20 times in one game. Scrums alone can generate more than 16,000 Newtons of force, which is equivalent to getting hit by a car at 30 miles an hour.

Or similar to a fight to the death between two fully grown Muskox males.

In addition to this, tackles can generate just under 2,000 Newtons of force and deliver the most frequent collision during a rugby game. This means that every 8 tackles would be equivalent to one scrum. Just to put it in perspective, there are more than 220 tackles in a professional rugby game.

And that’s not even including mauls and rucks.

Even though scrums are known for their display of raw power, there is nothing like watching a perfectly executed lineout. Lineouts are the acrobatics of rugby, which is usually carried out by the tallest players on the team and a cast of supporting lifters. And, besides giving players the chance to show off their finesse, it also provides a perfect opportunity for a trick play.

That being said, there’s also an awful lot of force that goes into lifting second-row men. Given the fact that the average lock weighs more than 100 kilograms, it would take more than 950 N to lift him to the highest point during every single lineout.

Although they are not as frequent as tackles, lineouts can still happen more than 9 times per game. This means that at the end of a game, each team would have generated enough power to lift a fully grown Rhinoceros!

3) The power of all scrums in a match is enough to push back an F1 car.

Despite the fact that the main goal was to score some epic footage (props to Red Bull and Bath Rugby Club for doing exactly that!), the human scrum proved to be a match for the F1 race car.

Red Bull’s RB8 – the race car model that was pitted against Bath’s starting scrum – was fitted with special gear to enable the unique match-up. And, as F1 pilot Daniel Ricciardo quickly realized, Bath’s 900kg of raw human power was enough to push the RB8 a few feet back!

4) The distance covered during a match.

In order to prove that rugby is just gruelling in every sense of the word, we decided to take a look at areas that are usually taken for granted.

For instance, the distance covered during a game.

To give you an idea, professional football players can cover anywhere between 8 to 12 km during a game. Also consider that fact that football is nowhere near as physical as rugby, which means that footballers should cover a lot more distance than rugby players.

However, the difference is not as large as you’d think. The distance covered during a rugby match is about 5 miles or 8.2 km, for those who like the metric system. This is equivalent to running around the perimeter of London’s Olympic Stadium a whopping total of 9.5 times.

If you think about it, some rugby players cover the same distance as football players and take a huge beating while they’re at it.

5) The number of collisions adds up to more than one per minute.

Lastly, it’s worth looking at the number of hits a rugby player endures every single game. The front row, who tend to engage in more contact than all other positions, can be involved in more than 80 collisions per game.

This can add up to more than one collision per minute for just a single player, which is even more impressive when you consider the duration and intensity that characterises all rugby games.

Getting the best results from your training regime.

There is no doubt that rugby is brutal, gruelling, and demanding, but it’s also fun and highly rewarding. Rugby players of all levels need to make sure their body is fit and powerful enough to avoid frequent injuries and deliver great results on the pitch.

If you’re looking to improve your performance, you need to start a strict exercise regime that helps you achieve your goals.

You can purchase our Complete Rugby Training E-Book for just £9.99 here.